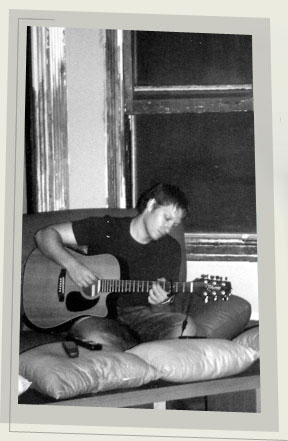 Tristen Shields Tristen launched into the thriving Midwestern music scene with his unique and intimate blend of folk and electronica. Through a relentless performance schedule and uncommon dedication to his craft Tristen has attracted a diverse and loyal following inspired by his poetic approach to writing and emotive live shows. His infectious melodies, insightful lyrics, and electronic flourishes cement a rare and engaging sound that has thrilled every major venue in the area. His release on the Datawaslost label (entitled "Migrations") in 2004 captivated critics and fans alike.

The diverse sound was bred out of the dualistic nature that permeates every aspect his life. His love of London-based electronica and pure organic folk evolved into a bold genre of fascinating and atmospheric music. It can best be described as Massive Attack meets Wilco meets Nick Drake and holds the listener close with great hooks and prosaic lyrics. It is with that sound that Tristen hopes to make an impact on the national music scene and lay a foundation for a long and productive career.

A well-traveled childhood and an educational background in cultural anthropology have prepared this resident Cincinnatian to divest the human experience into poignant song. He possesses the rare ability to let others into his mind and through that vehicle experience the wonder and detachment of a generation. He is ignited by stimulation that explodes in unlikely directions and pursues his dreams, undaunted by the "no" tradition, formality, and the jagged rocks thrown by life itself. He is a dreamer, a man-child pursuit of a new American Dream that houses no white picket fences, obligations, and obsequious words. A lover of solitude, thoughts written on scraps of virgin paper and thrown into a universe of individuals who are hungry for something that has not yet roared into their conscience. Still, he glimmers of the little boy you would've liked to have known back in the day, down on the corner, out in the sandbox, appear at the most unsuspecting times and then is swept away with the wind.

His most recent EP, Here Lies Sea Monster, was released in April 2009 on Datawaslost.