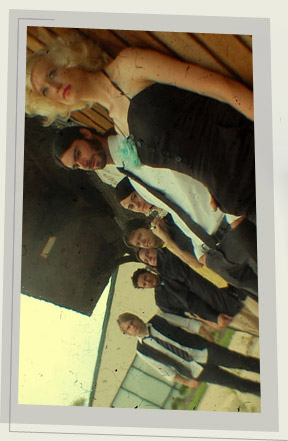 Elsewhere [ Facebook ]  [ Twitter ]  [ YouTube ]  [ Bandcamp ]  [ MySpace ] Shows Past Shows
The Minor Leagues Ben Walpole wishes he were British, fronting Pulp in 1995. Patrick Helmes wishes he were playing lead for Megadeth in 1988. But cruel fate has instead placed them both in the Minor Leagues, playing insidiously catchy indiepop for most of the last decade from their Cincinnati, Ohio homebase.

The Leagues' sixth allbum arrived on Datawaslost in 2012, a baroque portrait of the neighborhood-as-history entitled 'North College Hill'. The entire record delights in nostalgia, with Brill Building arrangements filtered through the drive and sing-along choruses of 90s Brit-pop, all set against a backdrop of lush instrumentation. It's this melange of orchestral pop sounds that's earned their previous albums comparisons to Beulah, New Pornographers, Blur, and Belle & Sebastian, while managing to sound almost nothing like any of them.

Joined live by Matt Retherford (Wilco, 1995), Jesse Rogers (Beach Boys, 1965), Luke McGlasson (Specials, 1978), Amanda Lee Anderson (Belle & Sebastian, 1999) and Hilly Kenkel (Ronettes, 1962), the Minor Leagues have taken their now-septet on the road, touring the Midwest and beyond in support of the new record.

The Tastemakers
{ DWL057 . Digital Single . 2012 }
A brasher, more up-tempo side of The Minor Leagues, in two-minute spitfire pop-song fashion.
MP3s  [ The Tastemakers ]  [ Words Are Not Deeds ]
More Info . Stream on Bandcamp

MP3  [ Only The Beginning ]
More Info